The Long Road Home: On Blackness and Belonging (Paperback) 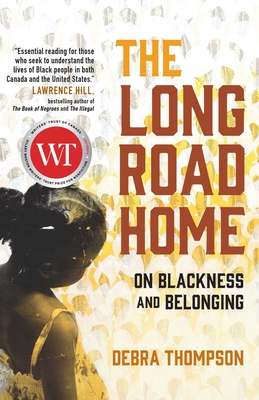 From a leading scholar on the politics of race comes a work of family history, memoir, and insight gained from a unique journey across the continent, on what it is to be Black in North America.

When Debra Thompson moved to the United States in 2010, she felt like she was returning to the land of her ancestors, those who had escaped to Canada via the Underground Railroad. But her decade-long journey across Canada and the US transformed her relationship to both countries, and to the very idea of home.

In The Long Road Home, Thompson follows the roots of Black identities in North America and the routes taken by those who have crisscrossed the world’s longest undefended border in search of freedom and belonging. She begins in Shrewsbury, Ontario, one of the termini of the Underground Railroad and the place where members of her own family found freedom. More than a century later, Thompson still feels the echoes and intergenerational trauma of North American slavery. She was often the Only One—the only Black person in so many white spaces—in a country that perpetuates the national mythology of multiculturalism.

Then she revisits her four American homes, each of which reveals something peculiar about the relationship between American racism and democracy: Boston, Massachusetts, the birthplace of the American Revolution; Athens, Ohio, where the white working class and the white liberal meet; Chicago, Illinois, the great Black metropolis; and Eugene, Oregon, the western frontier. She then moves across the border and settles in Montreal, a unique city with a long history of transnational Black activism, but one that does not easily accept the unfamiliar and the foreign into the fold.

The Long Road Home is a moving personal story and a vital examination of the nuances of racism in the United States and Canada. Above all, it is about the power of freedom and the dreams that link and inspire Black people across borders from the perspective of one who has deep ties to, critiques of, and hope for both countries.

Debra Thompson is an associate professor of political science at McGill University in Montreal, Canada. She is an internationally recognized, award-winning scholar of the politics of race and holds a Canada Research Chair in Racial Inequality in Democratic Societies. She completed her PhD at the University of Toronto, held a postdoctoral fellowship at Harvard University, and taught in the Department of African American Studies at Northwestern University before moving to the University of Oregon to help build its Black Studies program. She is the author of The Schematic State: Race, Transnationalism, and the Politics of the Census, which received three major awards from the American Political Science Association. She has published numerous articles in scholarly journals and is a regular commentator in print and on television on the state of race and racism in Canada and the United States. Connect with her on Twitter @DebThompsonPhD.

“[A] compelling personal essay about Blackness, racism, and the courage to live with dignity and to forge a sense of belonging in Ontario, Massachusetts, Ohio, Illinois, Oregon, and Quebec. Thompson draws upon an admirable range of experience and analysis as she stitches together narratives of injustice that straddle two countries and two languages. Essential reading for those who seek to understand the lives of Black people in both Canada and the United States.”
— LAWRENCE HILL, bestselling author of The Book of Negroes and The Illegal

“With the dual scalpels of academic training and personal experience, Debra Thompson cuts through the veneer of nationalistic self-delusion to produce an honest and uncompromising account of how racism slips and mutates across borders. But in this act of necessary excavation, Thompson also finds so many wellsprings of community, bonding, and joy.”
— OMAR EL AKKAD, Scotiabank Giller Prize–winning author of What Strange Paradise

“This powerful chronicle of race and belonging slides between political analysis and personal truths with clarity, purpose, and heart. Thompson has crafted a testimony of, and a love letter to, the contemporary Black experience in Canada and the USA.”
— KAMAL AL-SOLAYLEE, award-winning author of Brown and Return

“An essential testament to the enduring power of Black life. Movingly written, it offers a wealth of vital insights on generational struggles, institutional cynicism, and the urgent task of imagining ‘home’ and ‘belonging’ against the entwined violence of anti-Blackness and settler colonialism. Debra Thompson is a writer and scholar of enormous importance.”
— DAVID CHARIANDY, award-winning author of Brother

“An important contribution to the politics of race in Canada. Debra Thompson deftly weaves the personal through a broader arc of historical and contemporary narratives on the meaning of place and belonging across national borders.”
— ROBYN MAYNARD, bestselling author of Policing Black Lives and coauthor of Rehearsals for Living

“Writing with such power and such vulnerability, Prof. Thompson takes us with her on a ten-year journey through what she rightly describes as the ‘predatory inclusion’ and savage racism of academia, the dystopia of the Trump administration, and the murder of George Floyd. Lest we think that Thompson was just in the wrong place at the wrong time, she uses her skills as a political scientist to show that there is no right place or right time to be Black in the U.S. Rather than seeking the ‘shallow belonging’ of North American nation-states, she asks how we can make our real home between worlds a space for liberation.”
— REBECCA HALL, JD, PhD, Author of Wake: The Hidden History of Women-Led Slave Revolts

“A meaningful contribution to the understanding of racism.”
— Publishers Weekly