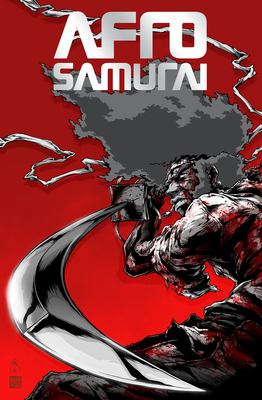 For fans of the original Afro Samurai manga and anime, this new “director’s cut” edition of the out-of-print cult classic book features a specially commissioned custom cover and a brand-new foreword by creator Takashi Okazaki.

In a feudal, futuristic Japan, samurai battle to become No.1 and rule the world, but when his father, who holds the coveted position, is challenged and killed, the young Afro Samurai vows vengeance. Relentlessly pursued by murderous assassins, will he stay alive long enough to keep his promise?

In the first of two volumes, we see the beginnings of young Afro’s quest, his battles with an array of assassins and warlords, that climaxes in the epic confrontation with the powerful Empty Seven Clan and a showdown with an old enemy…

Takashi Okazaki is a Japanese manga writer and artist, and visual designer most well-known for creating Afro Samurai. He has also created character designs for many other games and anime, including Batman Ninja. Most recently, he has worked as a cover artist for Marvel Comics on titles including Werewolf by Night, Black Widow and Deadpool.

"A throwback to the kind of manga I used to love. Recommended." - Otaku USA Magazine

"Super stylish and ultra-violent, this isn't for the faint hearted, but for the OG gangstas out there, it's the real deal." - Mainly Manga

"For fans of the genre, the raw, largely unpandering violence is impressive." - Ain't It Cool

"I absolutely fell in love with everything about this!" - Maddogg Comics

"You get to marvel at the awesome artwork. A great translation." - Astonishing Melanie, Near Mint Condition