The Right to Be Lazy: And Other Writings (Paperback) 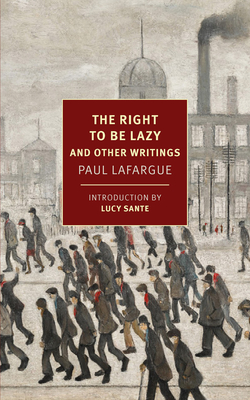 Now in a new translation, a classic nineteenth-century defense for the cause of idleness by a revolutionary writer and activist (and Karl Marx's son-in law) that reshaped European ideas of labor and production.

Exuberant, provocative, and as controversial as when it first appeared in 1880, Paul Lafargue’s The Right to Be Lazy is a call for the workers of the world to unite—and stop working so much! Lafargue, Karl Marx’s son-in-law (about whom Marx once said, “If he is a Marxist, then I am clearly not”) wrote his pamphlet on the virtues of laziness while in prison for giving a socialist speech. At once a timely argument for a three-hour workday and a classical defense of leisure, The Right to Be Lazy shifted the course of European thought, going through seventeen editions in Russia during the Revolution of 1905 and helping shape John Maynard Keynes’s ideas about overproduction. Published here with a selection of Lafargue’s other writings—including an essay on Victor Hugo and a memoir of Marx—The Right to Be Lazy reminds us that the urge to work is not always beneficial, let alone necessary. It can also be a “strange madness” consuming human lives.

Paul Lafargue (1842–1911) was born in Santiago, Cuba, and lived there until the age of nine, when his family returned to their hometown of Bordeaux, France. In his early twenties, Lafargue began studying medicine in Paris, but after participating in a socialist gathering was barred from the French university system and left the country to continue his studies in London. There, he served as Karl Marx’s secretary and married Marx’s daughter Laura. Moving back to France in 1870, he participated in the Paris Commune and was again forced to flee the country, first to Spain and then to England. After amnesty was granted to the Communards in 1882, he and Laura returned permanently to France, where Lafargue gained notoriety as a writer of pamphlets and articles on politics and literature, founded the country’s first Marxist labor party, and earned his law degree. On the night of November 26, 1911, he committed “rational suicide” with Laura at their home near Paris. Lenin spoke at their funeral.

Lucy Sante is the author of Low Life, Evidence, The Factory of Facts, Kill All Your Darlings, Folk Photography, The Other Paris, and most recently, Maybe the People Would Be the Times. She translated Félix Fénéon’s Novels in Three Lines and has written introductions to several other NYRB Classics, including Classic Crimes by William Roug­head and Pedigree by Georges Simenon. A frequent contributor to The New York Review of Books, she teaches writing and the history of photography at Bard College.

Alex Andriesse’s stories, essays, and poems have appeared in Granta, The Review of Contemporary Fiction, Prodigal, and Literary Imagination. He has translated several works from Italian and French, including Roberto Bazlen’s Notes Without a Text and Other Writings and François-René de Chateaubriand’s Memoirs from Beyond the Grave, 1768–1800 (an NYRB Classic). He is an associate editor at New York Review Books.

“These piercing essays from socialist Lafargue offer a valuable window into early Marxist thinking. . . . these pieces speak to the present moment, when pandemic-related disruptions have provoked reconsiderations of where, how, and why people work. Readers will relish this incendiary blast from the past.” —Publishers Weekly

“With scathing wit, Lafargue takes aim at the ideological underpinnings of late-stage capitalism. . . . A sly, irreverent sibling to The Communist Manifesto, Lafargue’s argument against our willing servitude to what we’d now call hustle culture and growth-at-all-costs is as trenchant and necessary as the day it was written, if not more so.” —David Wright, Library Journal

"[Lafargue's] ideas are even more relevant to today's enslaved societies than they were when they were first written." —Tom Hodgkinson, editor of The Idler