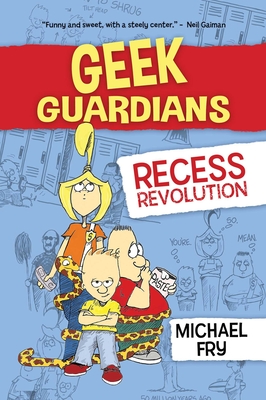 Join oddball outsiders Nick, Molly, and Karl in a hilarious middle-school illustrated novel adventure full of awkwardness and missteps as they strive to be seen in a world that would prefer they stay invisible.

Nick is the shortest seventh-grader in the history of the world (he’s pretty sure), he doesn’t fit in with any groups or clubs (who needs ’em?), and he spends more time inside than outside his locker (they’re roomier than you’d think). Things only get worse when a well intentioned guidance counselor forces Nick to join the school’s lamest club—along with fellow misfits Molly and Karl—in her quest to cure all three of their “peer allergies.” What starts off as a reluctant band of hopeless oddballs morphs into an effective and empowered team ready to face whatever middle school throws at them, including bullies, awkward romance, zany adults, and a brave new world of surprising friendships. Renowned cartoonist Michael Fry brings an unforgettable cast of characters to life in this illustrated novel brimming with honesty, humor, and heart.

Michael Fry is an author/illustrator/screenwriter. He is the co-creator/writer of the syndicated comic strip Over the Hedge that inspired the 2006 DreamWorks Animation feature animated film (the most successful film ever made from a comic strip). He is also the creator of three additional syndicated comics including Committed, which was made into an animated prime-time television series produced by Nelvana. Fry is the author/illustrator of several middle-grade children’s book series, including the bestselling How to Be a Supervillain series (Little Brown), The Naughty List, Bobbie Mendoza Saves the World (Again) (with Bradley Jackson) (Harper Collins), and the most recent illustrated novel Ghosted (Houghton Mifflin Harcourt). Fry received the Denise McCoy Legacy Award for the most humorous children’s book of 2015 for Odd Squad: King Karl. Given the popularity of The Odd Squad, Michael is rebooting the series as Geek Guardians for Silver Dolphin Books. He lives on a small ranch near Austin, Texas, with his wife Kim, dog Loki. and several unnamed shrub-eating cows.