The Last Book You'll Ever Read: The Complete Series (Paperback) 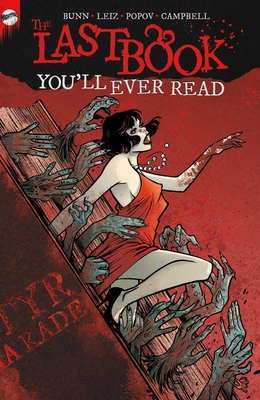 A supernatural horror thriller for readers of Chuck Palahniuk (Lullaby and Haunted: A Novel),  Marisha Pessl,(Night Film), and Scarlett Thomas (The End of Mr. Y), The Last Book You’ll Ever Read tells the terrifying story of a woman who knows the horrific truth about the past – and future - of humankind, and, when captured in her book SATYR, it becomes the catalyst for worldwide, mind-numbing violence.

Read this book at your own peril.
Olivia Kade wrote the book that ended the world. Now she needs someone who won't read it.

Civilization is a lie. Hidden deep in our genes is the truth. And it is slowly clawing its way to the surface. Olivia Kade knows the truth, and she has become the prophet of the coming collapse. Her book, SATYR, is an international bestseller, and it is being blamed for acts of senseless violence and bloodshed all over the world. Olivia's own life is in danger from those who have read her work. Determined to conduct a book tour, she hires security professional Connor Wilson to act as her bodyguard. She only has one requirement: he cannot read her work.

John Carpenter’s In the Mouth of Madness meets Chuck Palahniuk’s Lullaby in this terrifyingly dangerous tale of the descent of humankind where reality and fantasy collide.

"I truly hope this terrific horror comic is in no way prescient or timely."  - Patton Oswalt

“…perfectly disturbing and mysterious.” – The Beat

"CULLEN BUNN is the writer of comic books such as THE SIXTH GUN, HARROW COUNTY, BONE PARISH, THE DAMNED, THE EMPTY MAN, THE GHOUL NEXT DOOR, BASILISK, SHADOWMAN, and many other titles including The Last Book You'll Ever Read for Vault Comics. He has fought for his life against mountain lions and performed on stage as the World’s Youngest Hypnotist.

Born and raised in France now living in Italy, Leila Leiz is a self-taught artist who worked for several years at European publishers including Soleil and Sergio Bonelli before fulfilling her lifelong dream of making the leap to American comics. Best known for her work on Paul Jenkins’ ALTERS for AfterShock and Horde with Marguerite Bennet, she has also worked on 451 Media’s NVRLND and was a contributor to AfterShock’s SHOCK anthology. She is working on M.O.M with Emila Clark (from Game of Thrones) and Marguerite Bennet for Image Comics and The Last Book You’ll Ever Read with Cullen Bunn for Vault Comics.

"I truly hope this terrific horror comic is in no way prescient or timely."
— Patton Oswalt (Comedian, actor, screenwriter)

“…perfectly disturbing and mysterious.”
— The Beat

"I got to read the first issue of this and YEEEEEEESH what a terrific, frightening new comic from @cullenbunn . GIT IT!"
— Patton Oswalt (Comedian, actor, screenwriter)

“I’m so blown away…, and I’m so excited for horror fans to get their hands on it. Aspects of it remind me of In the Mouth of Madness, but even more twisted. I’m so, so excited for this story to unfold. Vault Comics never fails to putout books with exceptional teams that truly bring a vision to life.”
— Wandering Nerd Girl