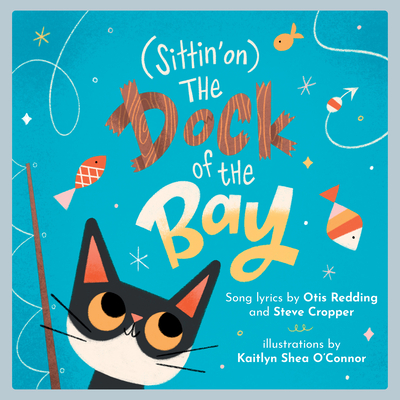 Otis Redding and Steve Cropper's timeless ode to never-ending days is given fresh new life in this heartwarming picture book.

Sittin' in the mornin' sun
I'll be sittin' when the evening comes
Watching the ships roll in
Then I'll watch 'em roll away again, yeah

(Sittin' on) The Dock of the Bay is a charming picture book set to one of the King of Soul's(TM) greatest hits. The song was one of the last Redding recorded, and ranked number four on Billboard's year-end Hot 100 chart, going on to win two GRAMMYs and be certified triple-platinum.

With lyrics by Otis Redding and Steve Cropper and illustrations by Kaitlyn Shea O'Connor, this picture book imagines a lonesome cat fishing off a dock and hoping the fish will bite soon. (Sittin' on) The Dock of the Bay is the perfect picture book for parents wanting to share a classic song with their children, allowing both to find joy in it along the way.

What Otis Redding's] voice conveyed to listeners was an immediate, almost unparalleled connection; he could wring inconceivable intensity and complexity out of a minimal phrase and returned, most often, to the basic, raw power of love.
--New York Times

The Otis Redding Foundation: Redding was dedicated to improving the quality of life for his community through the education and empowerment of its youth. He provided scholarships and summer music programs which continued until his untimely death on December 10, 1967. Today, the mission of the Otis Redding Foundation, established in 2007 by Mrs. Zelma Redding, is to empower, enrich, and motivate all young people through programs involving music, writing, and instrumentation. To learn more, visit: otisreddingfoundation.org.

Otis Redding (1941-1967) was a singer, songwriter, and producer often referred to as the King of Soul(TM). Known for releasing such acclaimed songs as These Arms of Mine, Try a Little Tenderness(TM), Hard to Handle, and (Sittin' on) The Dock of the Bay, Redding is considered to be one of the most influential singers and songwriters of all time. He received two GRAMMYs as well as a GRAMMY Lifetime Achievement Award, and was inducted into the Rock & Roll Hall of Fame and the Songwriters Hall of Fame. To learn more, visit: otisredding.com.Steve Cropper is an American guitarist and songwriter from Memphis, voted by Rolling Stone to be one of the Top 100 Guitarists of All Time. Cropper started out in a band called the Mar-Keys and was later part of Booker T. & the MG's, releasing the Billboard chart-topping Green Onions and backing numerous artists such as Otis Redding and the iconic Blues Brothers band.Kaitlyn Shea O'Connor (illustrator) is an illustrator and designer hailing from Atlanta, Georgia. She combines traditional skills with digital media to create vibrant, whimsical worlds. She's a rare hybrid of dog and cat lover, an avid whistler, and she enjoys exploring the great outdoors, trying new cheeses, and cozying up in a nook with a book. O'Connor illustrated the children's picture book We Got the Beat, with song lyrics by Charlotte Caffey.