Bill Cohen's 1972 Campaign for Congress: An Oral History of the Walk That Changed Maine Politics (Hardcover) 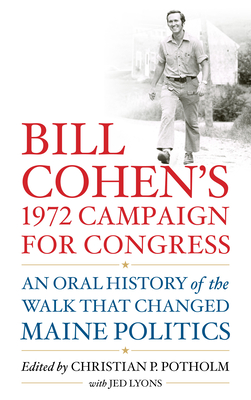 1972 was a true watershed in Maine politics. Following a hundred years of Republican dominance, Democrats led by Senator Ed Muskie had achieved a string of victories that threatened to sweep Republicans from the board of congressional and gubernatorial offices. On election day only the win by first time Republican congressional candidate Bill Cohen would stop the Democrat shut out. Cohen won by determination and perseverance, charisma, and grit, and by his campaign 650-mile walk across Maine's expansive second congressional district from Gilead on the New Hampshire border to Ft. Kent on the Canadian border. The Walk, as it became known, was an over-arching feature of that campaign and soon became a staple of the subsequent successful campaigns by congressional, senate, and gubernatorial candidates in the Pine Tree State. On the fiftieth anniversary of a campaign that would change the course of Maine politics and propel Cohen onto the national political stage where he would play prominent roles in the House, Senate, and as secretary of defense, this book captures, in the vivid and often surprising words of the participants, how The Walk came to be.

Christian P. Potholm, professor of political science at Bowdoin College and a leading expert on Maine politics, is the author of This Splendid Game: Maine Campaigns and Elections, 1940-2002. He resides in Harpswell, Maine. Jed Lyons was one of Bill Cohen's advance men during the 1972 walk. He helped organize four counties, including Androscoggin, a Democratic stronghold. Jed worked in Bill's Washington office in 1973. In 1975, he cofounded the precursor to Rowman & Littlefield, the publisher of this book. He currently serves as its CEO and president. He is a member of the Council on Foreign Affairs.