When Mortals Play God: Eugenics and One Family's Story of Tragedy, Loss, and Perseverance (Hardcover) 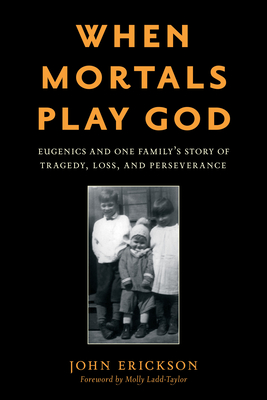 By John Erickson, Molly Ladd-Taylor (Foreword by)
Not Available

American history is full of examples of discrimination in all forms, but never before has the wreckage from America's infatuation with eugenics and its state-sanctioned policy of hate toward the mentally ill been put in such personal terms. In this extraordinary debut book, Pulitzer Prize winning journalist John Erickson answers the questions that have long haunted an immigrant family: Why was a mother in her early twenties imprisoned and then sterilized? What caused her three children to be taken from her and placed in an orphanage that later preyed on children? What led her oldest son to commit an unspeakable act of violence? And, finally, whatever happened to her youngest son who disappeared from her life and was never seen by the family again? This is a tragic story, yet strangely an uplifting one. Because just as officials believed immorality and mental illness were as genetically linked as eye and hair color, various family members would prove them wrong. In a story that will make you seethe with anger and well with tears, When Mortals Play God shows how valuable life is, and how grit and determination can sometimes relegate evil and injustice to a back seat.

John Erickson spent more than 30 years in journalism at newspapers in North Dakota, Montana, Illinois and Ohio. At the Dayton (Ohio) Daily News, he led the coverage on three stories that were finalists for the Pulitzer Prize, including a series that won the Pulitzer for National Reporting in 1998. In 2019, he was inducted into the Ohio Associated Press Media Editors' Hall of Fame. John grew up in Minneapolis, Minnesota, and graduated from the University of Minnesota with a degree in journalism. He lives in Dayton, Ohio, with his wife and their two children. He is dedicating the book to his mother who, God willing, will be 100 years old in November 2021.