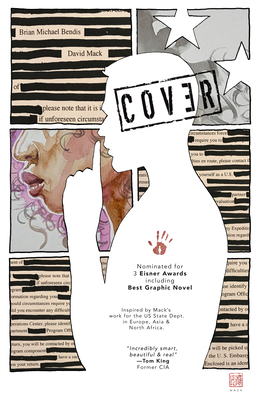 Based on a true story, the intelligence community figures out that the traveling band of social misfits who make comic books are an exact match to the profiles of candidates recruited for intelligence and counterintelligence gathering. A well-known comics creator is recruited by the agency to live a double life as a spy. And convention season is upon us.

COVER is the blockbuster new epic from the renowned team of writer Brian Michael Bendis (Superman, Action Comics) and David Mack (Kabuki, Jessica Jones) as they reunite for the first time since their renowned run on Daredevil.

Collects issues #1–#6 with a brand-new cover by David Mack!

Brian Michael Bendis is an American comic book writer and artist. He has won five Eisner Awards for both his creator-owned work and his work on various Marvel Comics books. Starting with crime and noir comics, Bendis eventually moved to mainstream superhero work. With Bill Jemas and Mark Millar, Bendis was the primary architect of the Ultimate Marvel Universe, launching Ultimate Spider-Man in 2000. He relaunched the Avengers franchise with New Avengers in 2004, and has also written the Marvel "event" storylines "Secret War" (2004–2005), "House of M" (2005), "Secret Invasion" (2008), "Siege" (2010) and "Age of Ultron" (2013). In addition to writing comics, Brendis has worked in television, video games and film. He has also taught courses on Graphic Novels at University of Oregon and Portland State University. In 2014, Bendis wrote Words for Pictures: The Art and Business of Writing Comics and Graphic Novels, a book about comics published by Random House.