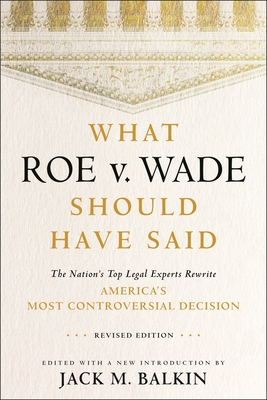 In January 1973, the Supreme Court's opinion in Roe v. Wade struck down most of the country's abortion laws and held for the first time that the Constitution guarantees women the right to safe and legal abortions. Nearly five decades later, in 2022, the Court's 5-4 decision in Dobbs v. Jackson Women's Health Organization overturned Roe and eliminated the constitutional right, stunning the nation. Instead of finally resolving the constitutional issues, Dobbs managed to bring new attention to them while sparking a debate about the Supreme Court's legitimacy. Originally published in 2005, What Roe v. Wade Should Have Said asked eleven distinguished constitutional scholars to rewrite the opinions in this landmark case in light of thirty years' experience but making use only of sources available at the time of the original decision. Offering the best arguments for and against the constitutional right to abortion, the contributors have produced a series of powerful essays that get to the heart of this fascinating case. In addition, Jack Balkin gives a detailed historical introduction that chronicles the Roe litigation-and the constitutional and political clashes that followed it-and explains the Dobbs decision and its aftermath.

Jack M. Balkin is Knight Professor of Constitutional Law and the First Amendment at Yale Law School, and the Founder and Director of Yale's Information Society Project. He is the author of numerous books, including The Cycles of Constitutional Time, and the editor of What Brown v. Board of Education ShouldHave Said. He lives in Branford, Connecticut..