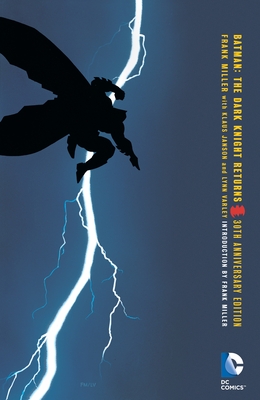 Writer/artist Frank Miller completely reinvents the legend of Batman in this saga of a near-future Gotham City gone to rot, 10 years after the Dark Knight’s retirement. Forced to take action, the Dark Knight returns in a blaze of fury, taking on a whole new generation of criminals and matching their level of violence. He is soon joined by a new Robin—a girl named Carrie Kelley, who proves to be just as invaluable as her predecessors.

Can Batman and Robin deal with the threat posed by their deadliest enemies, after years of incarceration have turned them into perfect psychopaths? And more important, can anyone survive the coming fallout from an undeclared war between the superpowers—or the clash of what were once the world’s greatest heroes?

Hailed as a comics masterpiece, The Dark Knight Returns is Frank Miller’s (300 and Sin City) reinvention of Gotham’s legendary protector. It remains one of the most influential stories ever told in comics, with its echoes felt in all media forms of DC’s storytelling. Collects issues #1-4.

Frank Miller began his career in comics in the late 1970s and rose to fame while first drawing, and then writing, Daredevil for Marvel Comics. He was also the creative force behind Batman: The Dark Knight Returns, Batman: Year One and Batman: The Dark Knight Strikes Again. His many works have not only redefined classic characters, but also, on a few occasions, revitalized the comics industry. His multi-award-winning graphic novel 300 was brought to full-blooded life in the 2007 motion picture of the same name, and in 2008 he directed the feature film Will Eisner's The Spirit. His creator-owned crime saga Sin City first hit the page in 1991, and then the silver screen in 2005, with Miller on board as co-director with Robert Rodriguez. The two returned to direct the sequel Sin City: A Dame to Kill For, released in 2014 and featuring two new stories by Miller. In 2015, Miller's returned to his best-selling series with the highly anticipated Dark Knight III: Master Race.

"In four groundbreaking issues in late 1986, Miller's DARK KNIGHT RETURNS delighted and enraged comic book classicists by turning Batman--a beloved but gimmicky hero who seemed to have the keys of life forever tucked into his utility belt-into a brooding vigilante, bleak, grim and full of rooftop psychosis." —USA Today

"There's never been storytelling quite like this. It took someone who views comics as an art to create it." —Washington Post

"His brutal yet elegant noir renderings, pulpy yet eloquent scripting, and thoroughly uncompromising attitude make him one of the most distinctive voices in comics." —Entertainment Weekly