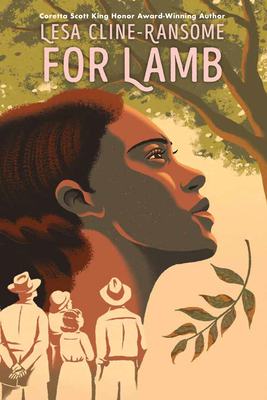 For Lamb follows a family striving to better their lives in the late 1930s Jackson, Mississippi. Lamb’s mother is a hard-working, creative seamstress who cannot reveal she is a lesbian. Lamb’s brother has a brilliant mind and has even earned a college scholarship for a black college up north-- if only he could curb his impulsiveness and rebellious nature.

Lamb herself is a quiet and studious girl. She is also naive.  As she tentatively accepts the friendly overtures of a white girl who loans her a book she loves, she sets a off a calamitous series of events that pulls in her mother, charming hustler uncle, estranged father, and brother, and ends in a lynching.

Lesa Cline-Ransome is the author of more than twenty books for young readers including the award-winning Finding Langston trilogy. Her work has received a plethora of honors, including dozens of starred reviews, NAACP Image Award nominations, a Coretta Scott King honor, the Scott O’Dell Award for Historical Fiction and a Christopher Award. Her work has been named to ALA Notable Books and Bank Street Best Children’s Book lists and she lives in the Hudson Valley region of New York.

★ "Told with nuance and subtlety, this is a powerful story of striving to succeed in the face of nearly impossible odds."—Booklist, Starred Review

★ "Cline-Ransome depicts injustice and violence with a perfect balance of brutality and sensitivity. She particularly excels at portraying the nuances of relationships and character motivations, which are often at odds. . . . For Lamb is a heartbreaking novel that will leave readers with a visceral understanding of history."—BookPage, Starred Review

"The voices of the characters complement each other, and the movement through narrators creates space for the readers to breathe so that the tension that fills the book from the very first page doesn’t completely overwhelm. An important and resolute depiction of the inhumanity of a still potent problem."—Kirkus Reviews