The Massively Multiplayer World of Ghosts, Volume 1: The King of Cheating (Saturday AM TANKS / MMWOG #1) (Paperback) 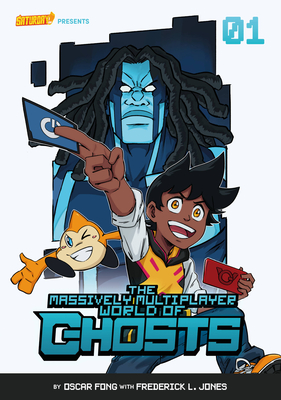 To discover what happened to his long-lost mother, unassuming teenager Nilay Rao must step into a new world, the Massively Multiplayer World of Ghosts.

Coasting through life without ever spending much effort or committing to anything has made many people think less of Nilay Rao. The teenager is relatively unassuming, as he’s not the most popular student, nor the hardest working. The kids call him “Nil,” suggesting that he’s a loser. But he has another name, the “biggest cheat,” which he’s earned from using cheat codes and hacks in everything from games to grades. But that all will change when Nilay receives a mysterious device from his long-lost mother, Dia.

Curious about the device, Nilay unwittingly creates his own “video game” avatar that he names Vyper Neo, which causes him more stress than he could imagine. The little orange character has his own personality and gets Nilay and his father into all sorts of trouble. That’s not all—the device itself belongs to a super-secret group of people who can summon similar video game avatars called Ghosts to battle over money, territory, and power.

Now that Nilay has it, he has officially become a “player” like them who can summon his own Ghost in Vyper Neo—and that’s made other players very angry. Can this lackluster teenager survive long enough to learn where his mother is and why she sent this device? Vyper Neo and his only human buddy, Chess, have his back, but taking on this massive new world won’t be easy. Like it or not, Nilay is going to have to play this game to win!

The Massively Multiplayer World of Ghosts is rated T for Teen, recommended for ages 13 and up.

Saturday AM, the world’s most diverse manga-inspired comics, are now presented in a new format! Introducing Saturday AM TANKS, the new graphic novel format similar to Japanese Tankobons where we collect the global heroes and artists of Saturday AM. These handsome volumes have select color pages, revised artwork, and innovative post-credit scenes that help bring new life to our popular BIPOC, LGBTQ, and/or culturally diverse characters.

Both an illustrator and comic artist, Oscar Fong is known online as “Fongfumaster.” He hails from the Auckland region of New Zealand, the land of kiwis and ghost chips. While he has a background in animation and digital design, Oscar focuses on illustrative projects and is fond of tabletop role-playing games and crafting.

American entrepreneur Frederick L. Jones was born in Durham, North Carolina, and graduated from the University of North Carolina at Chapel Hill with a BA in Communication Studies. He developed a passion for promoting diversity at a young age, including participating in the fight for a Black Student Union on UNC’s campus and attending the original Million Man March in 1995. He spent a decade in the video game industry as an executive. Having worked on nearly every part of product creation, including product marketing, product development, and brand management, Frederick combined his experience with his lifelong love of anime to create the diverse manga brand Saturday AM in 2013. He resides in Raleigh-Durham, North Carolina, with his family and dog, Allie.

Saturday AM is a unique digital comics brand featuring an ever-growing catalog of popular, exclusive, and diverse action manga-style webcomics by independent creators from around the world. Among the nearly 50 visionary artists on the Saturday AM team are @WhytManga (Apple Black), @JeyOdin (Hammer), and @saigaimiproject (Saigami). To learn more about Saturday AM, visit saturday-am.com, or find them on Instagram (@saturday_am), YouTube (youtube.com/user/MyFutprint), and Twitter (@saturday_am).

“Readers will be drawn into the pages by the action-packed illustrations, featuring plenty of fight scenes, superpowered game avatars, and dynamic visual perspectives”—Jonathan Khan, Booklist