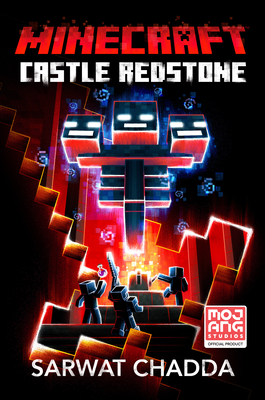 Rajah would do anything to be a great adventurer. But how can he, when his father’s already triumphed over every adventure he can think of? Lord Maharajah fought the Ender Dragon, charted the Overworld, and built a grand manor house. Rajah is surrounded by hand-me-downs, from his father’s fancy old name to his fancy old sword.

His servant, Pal, and his squire, Faith, do what they can to help. But Pal is too gentle to be any good in a fight, and Faith’s faith is being tested by the knight she thought was a hero. Try as he might, Rajah isn’t anyone’s hero—he’s everyone’s punchline.

Everything changes, though, when, at the end of another day’s failure, Rajah, Pal, and Faith find something: a map that leads to the one place Lord Maharajah never conquered—a legendary castle rumored to hide a mysterious lost civilization’s wondrous inventions.

At last, the greatest adventure of their lives has begun. The three must trek through perilous swamps, climb high mountains, and discover their true worth. It’s the only way to reach their distant destination: Castle Redstone!

A lifelong gamer, Sarwat Chadda decided to embrace his passion for over-the-top, wild adventure stories by trading in a stable twenty-year career in engineering for a highly unstable, brand-new one as a writer. That resulted in his first novel, Devil’s Kiss, back in 2009.

Since then he has been published in a dozen languages, writing comic books, TV shows, and novels, such as the award-winning Indian mythology–inspired Ash Mistry series, the epic high fantasy Shadow Magic trilogy (as Joshua Khan), and City of the Plague God for Rick Riordan Presents.

While he’s traveled far and wide in places that include Africa, the Middle East, Europe, Asia, and the Americas, he’s most at home in London, where he lives with his wife, two more-or-less grown-up daughters, and an aloof cat. And, yes, he still runs his Dungeons & Dragons game every Wednesday.