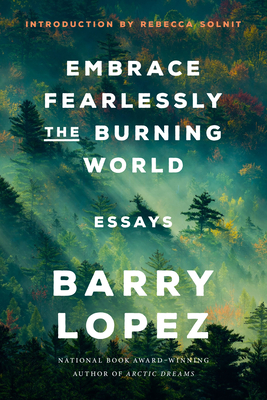 An ardent steward of the land, fearless traveler, and unrivaled observer of nature and culture, Barry Lopez died after a long illness on Christmas Day 2020. The previous summer, a wildfire had consumed much of what was dear to him in his home place and the community around it—a tragic reminder of the climate change of which he’d long warned.

At once a cri de coeur and a memoir of both pain and wonder, this remarkable collection of essays adds indelibly to Lopez’s legacy, and includes previously unpublished works, some written in the months before his death. They unspool memories both personal and political, among them tender, sometimes painful stories of his childhood in New York City and California, reports from expeditions to study animals and sea life, recollections of travels to Antarctica and other extraordinary places on earth, and meditations on finding oneself amid vast, dramatic landscapes. He reflects on those who taught him, including Indigenous elders and scientific mentors who sharpened his eye for the natural world. We witness poignant returns from his travels to the sanctuary of his Oregon backyard, adjacent to the McKenzie River. And in prose of searing candor, he reckons with the cycle of life, including his own, and—as he has done throughout his career—with the dangers the earth and its people are facing.

With an introduction by Rebecca Solnit that speaks to Lopez’s keen attention to the world, including its spiritual dimensions, Embrace Fearlessly the Burning World opens our minds and souls to the importance of being wholly present for the beauty and complexity of life.

“This posthumously published collection of essays by nature writer Barry Lopez reveals an exceptional life and mind . . . While certainly a testament to his legacy and an ephemeral reprieve from his death in 2020, this book is more than a memorial: it offers a clear-eyed praxis of hope in what Lopez calls this ‘Era of Emergencies.’”—Scientific American

Barry Lopez (1945–2020) was the author of various essay and story collections: Arctic Dreams, which received the National Book Award; Of Wolves and Men, a National Book Award finalist; and, most recently, Horizon, which was named a best book of the year by The New York Times, NPR, and The Guardian. A frequent contributor to both American and foreign journals, Lopez was the recipient of fellowships from the Guggenheim, Lannan, and National Science foundations and was honored by numerous institutions for his literary, humanitarian, and environmental work. He lived in Finn Rock, Oregon, with his wife, Debra Gwartney.

“Lopez did not take the task of writing lightly. . . . Sentences shimmer and punch. . . . In one of the 27 essays that are collected here, he tries to pin down the point of it all: ‘The central project of my adult life as a writer,’ he says, ‘is to know and love what we have been given, and to urge others to do the same.’ . . . He loved this world, and did his best, and pointed us the way.”—The New York Times

“Mesmerizing . . . The book reviewer runs out of superlatives, quailing before the work of the nature writer, essayist and fiction writer Barry Lopez (1945–2020), whose insight and moral clarity have earned comparisons to Henry David Thoreau. . . . To read Barry Lopez is to put yourself in the hands of a master observer who is enthralled by the strange beauty of our fragile planet, and who will be the first to tell you how little he actually knows.”—The Wall Street Journal

“Lyrical, his climate-change writing alone is for the ages.”—Chicago Tribune

“This posthumously published collection of essays by nature writer Barry Lopez reveals an exceptional life and mind. . . . While certainly a testament to his legacy and an ephemeral reprieve from his death in 2020, this book is more than a memorial: it offers a clear-eyed praxis of hope in what Lopez calls this ‘Era of Emergencies.’”—Scientific American

“Altogether, the pieces are honest and searching, engaging readers in the largest of questions: How do we live in the world? How do we see it? How do we protect it? . . . A sterling valediction. Lopez’s many followers will treasure this book.”—Kirkus Reviews (starred review)

“In this precious posthumous collection of recent and previously unpublished essays, [Lopez] reveals many more dimensions of his quests and discoveries. . . . Readers will treasure this hearth of a collection from a crucial and profound writer of spirit, commitment, benevolence, and reverence.”—Booklist (starred review)