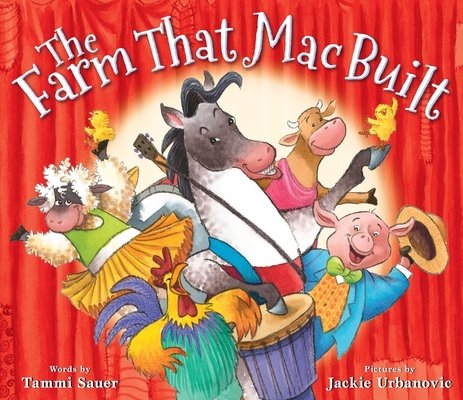 The scarecrow from Old Mac Donald’s farm emcees a barnyard theater production that collapses into hilarious chaos in this rollicking rendition of “The House That Jack Built.”

It’s showtime on Old Mac Donald’s Farm! The barnyard animals are putting on a play—a farm version of "The House That Jack Built"— but other animals keep taking the stage and interrupting the production. First some rambunctious monkeys, then breakdancing kangaroos . . . there’s even a pair of singing elephants. Everyone knows that monkeys, kangaroos, and elephants do NOT belong on a farm . . . so what to do?

Bursting with sound effects and rollicking repetition that will have kids clamoring for repeat readings, this hilarious mashup of two favorite nursery rhymes shows that perseverance and teamwork pay off, and that sometimes you just have to roll with the unexpected and try to have fun with it.

Tammi Sauer, a former teacher and library media specialist, is the full-time author of many popular picture books, including Quiet Wyatt, illustrated by Arthur Howard, and Nugget and Fang and Nugget and Fang Go to School, both illustrated by Michael Slack. Getting kids excited about reading and writing is her passion. Her other passion is tropical tea. Tammi and her family live in Edmond, Oklahoma, with one dog, two geckos, and a tank full of random fish. www.tammisauer.com Twitter: @SauerTammi.

Jackie Urbanovic is the creator of many popular picture books, including the New York Times bestsellers Duck at the Door and Duck Soup, which she also wrote, and No Sleep for the Sheep by Karen Beaumont. She lives in Silver Spring, Maryland, and shares her studio with two playful dogs and one lovable cat, all rescue animals. www.jackieurbanovic.com

"Lots of word repetition and animal sound effects, combined with Urbanovic’s comically expressive cartoon illustrations, make this a rollicking read-aloud that will encourage young readers to join in on the silliness."—School Library Journal

"Sauer’s cumulative mashup of 'Old MacDonald Had a Farm' and 'The House That Jack Built' will delight audiences familiar with both. Urbanovic’s cartoon illustrations of (mostly) clothed animal performers elevate this nightmare production into a hilarious comedy of errors....No owls here, but this one is definitely a hoot." —Kirkus