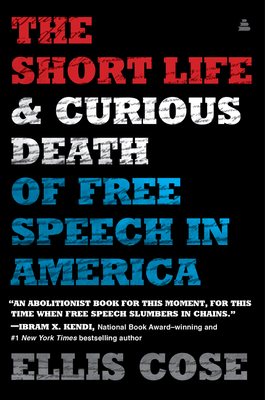 The critically acclaimed journalist and bestselling author of The Rage of a Privileged Class explores one of the most essential rights in America—free speech—and reveals how it is crumbling under the combined weight of polarization, technology, money and systematized lying in this concise yet powerful and timely book.

Free speech has long been one of American's most revered freedoms. Yet now, more than ever, free speech is reshaping America’s social and political landscape even as it is coming under attack. Bestselling author and critically acclaimed journalist Ellis Cose wades into the debate to reveal how this Constitutional right has been coopted by the wealthy and politically corrupt.

It is no coincidence that historically huge disparities in income have occurred at times when moneyed interests increasingly control political dialogue. Over the past four years, Donald Trump’s accusations of “fake news,” the free use of negative language against minority groups, “cancel culture,” and blatant xenophobia have caused Americans to question how far First Amendment protections can—and should—go.

Cose offers an eye-opening wholly original examination of the state of free speech in America today, litigating ideas that touch on every American’s life. Social media meant to bring us closer, has become a widespread disseminator of false information keeping people of differing opinions and political parties at odds. The nation—and world—watches in shock as white nationalism rises, race and gender-based violence spreads, and voter suppression widens. The problem, Cose makes clear, is that ordinary individuals have virtually no voice at all. He looks at the danger of hyper-partisanship and how the discriminatory structures that determine representation in the Senate and the electoral college threaten the very concept of democracy. He argues that the safeguards built into the Constitution to protect free speech and democracy have instead become instruments of suppression by an unfairly empowered political minority.

But we can take our rights back, he reminds us. Analyzing the experiences of other countries, weaving landmark court cases together with a critical look at contemporary applications, and invoking the lessons of history, including the Great Migration, Cose sheds much-needed light on this cornerstone of American culture and offers a clarion call for activism and change.

Ellis Cose was a longtime columnist and contributing editor for Newsweek magazine, the former chairman of the editorial board of the New York Daily News, and is the creator and director of Renewing American Democracy, an initiative of the University of Southern California, Northwestern, and Long Island University. He began his journalism career as a weekly columnist for the Chicago Sun-Times and has been a contributor and press critic for Time magazine, president and chief executive officer of the Institute for Journalism Education, and columnist and chief writer on management and workplace issues for USA Today. Cose has appeared on the Today show, Nightline, Dateline, ABC World News, Good Morning America, and a variety of other nationally televised and local programs. He has received fellowships or individual grants from the Ford Foundation, the Andrew W. Mellon Foundation, the Rockefeller Foundation, and the University of California, among others, and has won numerous journalism awards. Cose is the author of The Short Life and Curious Death of Free Speech in America, Bone to Pick, The Envy of the World, the bestselling The Rage of a Privileged Class, and several other books.

“In a stunningly original book, Ellis Cose cuts to the very core of free speech battles. Ordinary people are being held captive by ear-splitting political voices while not enough Americans are protecting and being freed by listening to the voices of ordinary people. An abolitionist book for this moment, for this time when free speech slumbers in chains.” — Ibram X. Kendi, National Book Award-winning and #1 New York Times Bestselling Author

“An urgent and illuminating work about the stranglehold the rich and powerful have on free speech. And, what is essential to defend the voice of individuals in order to protect the freedoms of all.” — Bakari Sellers, New York Times bestselling author of My Vanishing Country

“Ellis Cose is a strong, brilliant, original writer dealing with the most important issues of our democracy—good and bad speech, the broken electoral college, our awful voter suppression problem, race, and the coronavirus crisis. His writings on divisive issues, past and present, come from a unique and compelling perspective.” — Martin Garbus, author of Courting Disaster: The Supreme Court and the Unmaking of American Law and North of Havana

“During this period of social disruption, misinformation and political uncertainty, Ellis Cose brilliantly outlines past battles to protect and expand the First Amendment to exercise our right to be heard and to speak truth to power. . . . As importantly, Cose brings us face-to-face with the reality that dark money and darker science are suborning truth to invented realities, and makes us face the fact that our proposition that free speech will out the truth, will instead be drowned in crashing waves of willful misinformation.” — Donna Brazile, New York Times bestselling author of Hacks, and Veteran Political Strategist and former Chair, Democratic National Committee

“This timely, compelling narrative guides its readers toward understanding the complex twists and turns of free speech in America.  This engrossing journey includes a diagnosis and dissection of a broken system with hope for a resurrection of free expression for individuals struggling to be heard and understood. A rigorous argument for a new trajectory for the First Amendment. Unfettered free speech may be greatly threatened, but don’t count it out…even amid a pandemic and cries for justice.” — Everette E. Dennis, Ph.D., professor, Medill School of Journalism, formerly Dean and CEO, Northwestern University in Qatar

“As Ellis Cose observes in his provocative and timely new book, ‘free speech’ has always been contested terrain, not a fixed star. With most Americans now getting their news and information from private platforms that seek to ‘engage’ rather than enlighten and that are optimized for corporate profits rather than public interest, the need for a critical analysis of the purpose of free speech has never been more urgent. Even readers who will view Cose’s ‘death’ notice as premature – perhaps especially those readers – will find much to grapple with here.” — Ben Wizner, Director, ACLU Speech, Privacy & Technology Project

“With searing clarity, Ellis Cose explores what happens when as a society, we coddle the powerful and privileged—even when they enable the forces of hate and pursue anti-democratic goals—at the expense of the people. . . . This book is both an indictment of our social and political landscape and a source for inspiration, offering a way forward for building a 21st century democracy—one where all of our voices are valued and heard.” — Vanita Gupta, Associate U.S. Attorney General